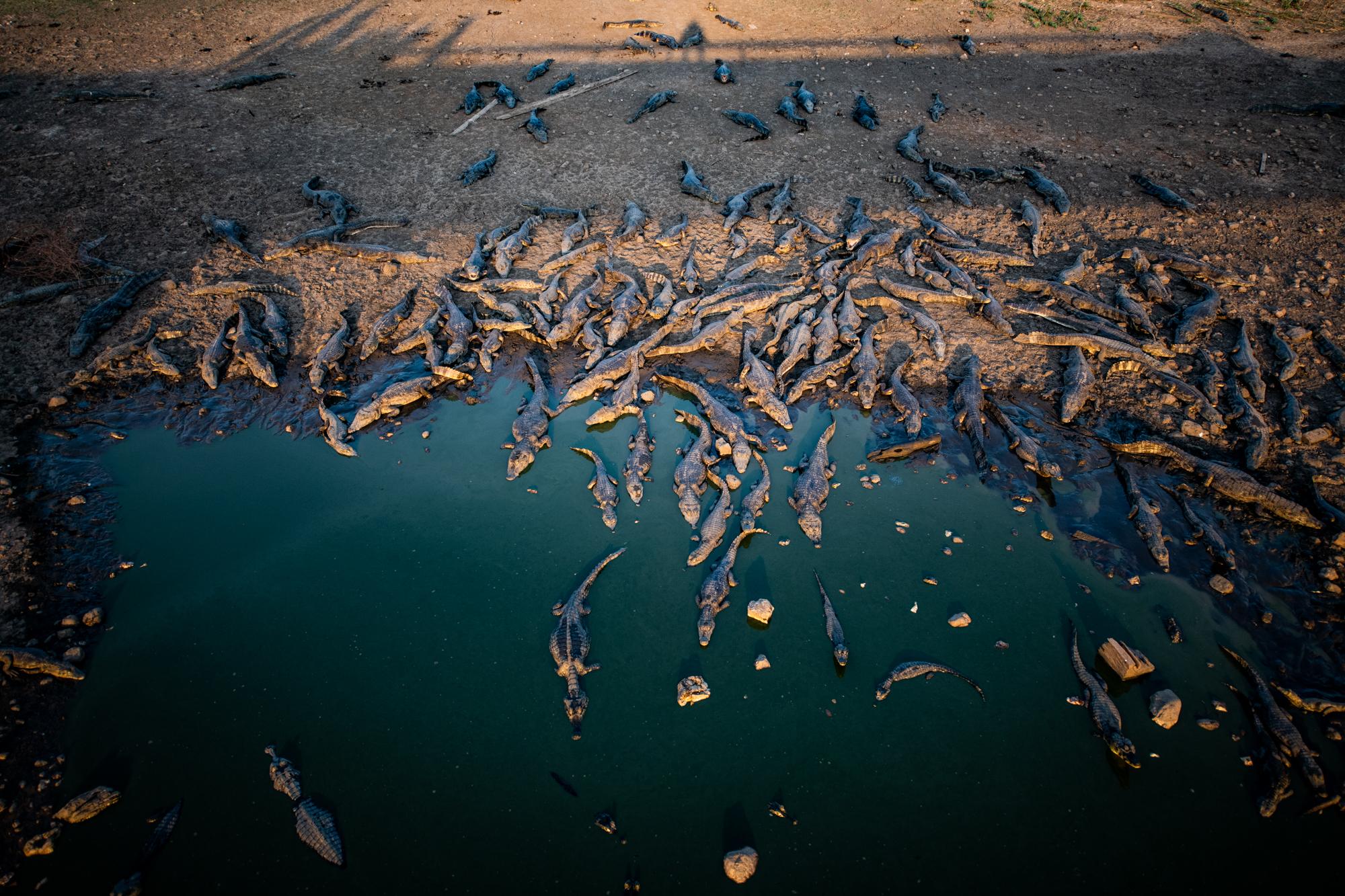 Stream under the 3rd bridge of Transpantaneira overcrowded with caimans. 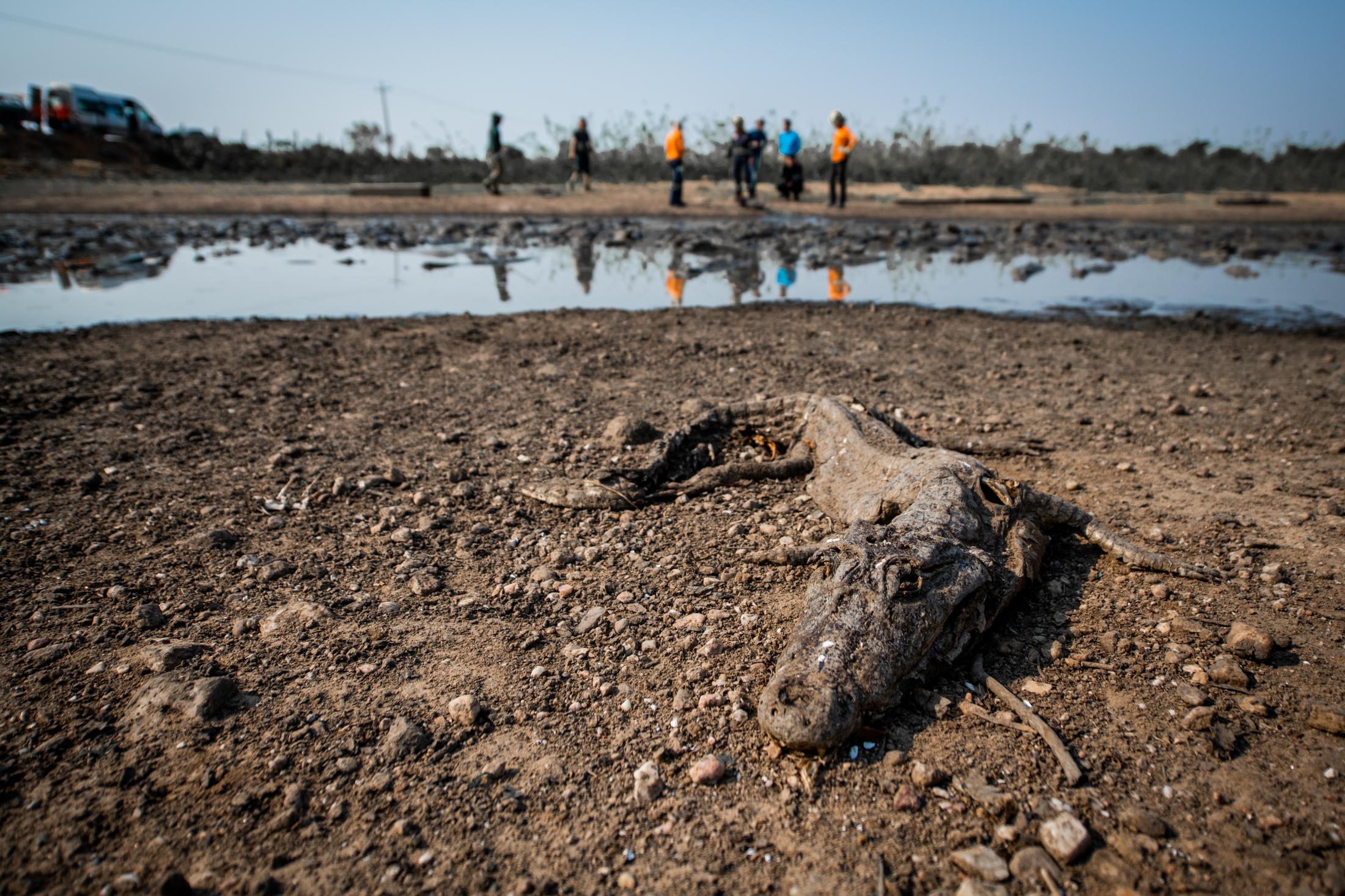 Pantanal Caiman (Caiman yacare) probably killed by drought in the stream of bridge 3 at Transpantaneira road. In the background, volunteers from the Group for the Rescue of Animals in Disasters (GRAD) and IBAMA agents are planning actions to relocate these animals. 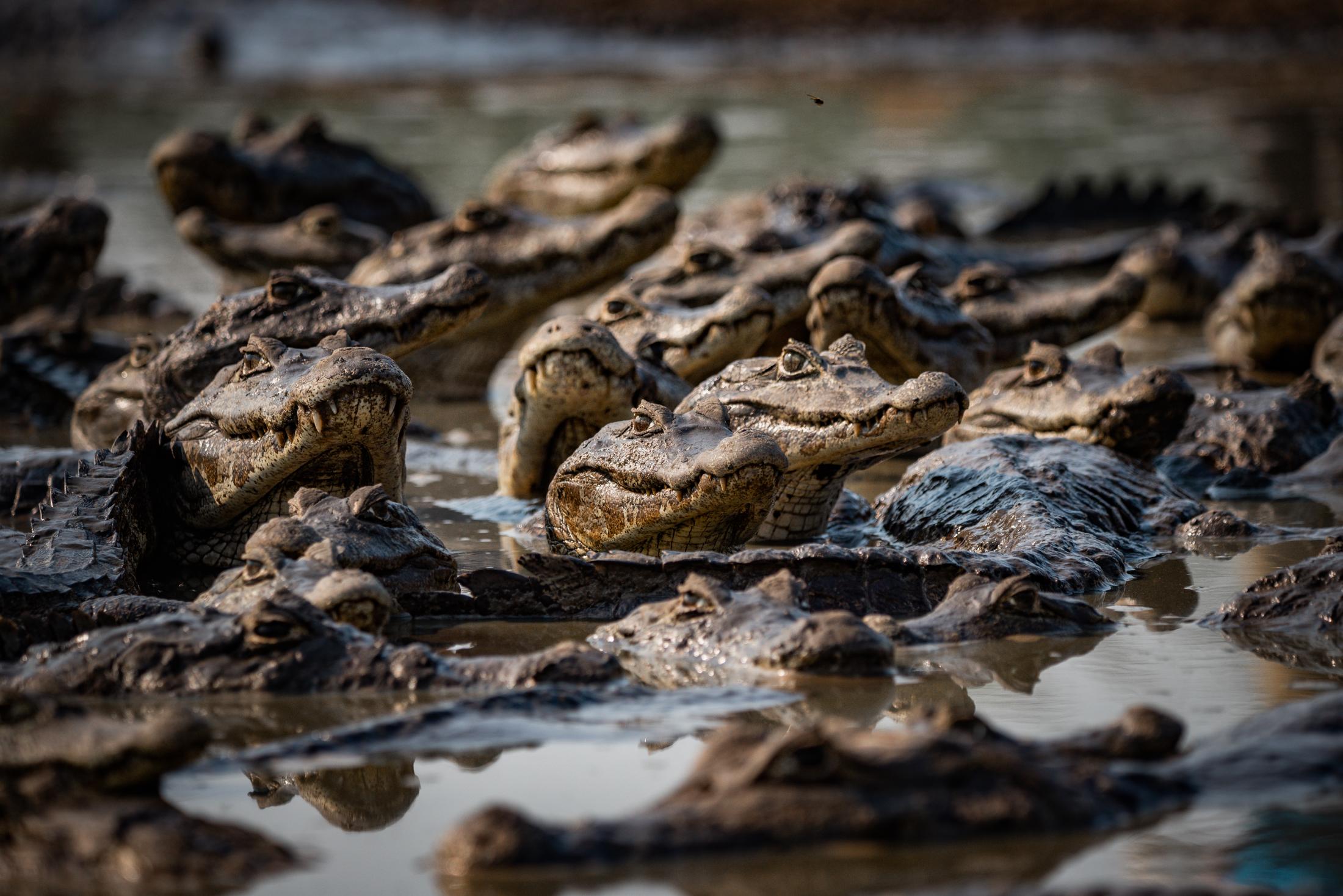 Hundreds of caimans gather in the center of the stream. The analysis of the local water was carried out by the NGO Ecotrópica, which confirmed that the conditions were totally incompatible with life. This analysis was essential for those involved in the operation to support the choice of moving the animals.

Cannibalism, a biological behavior of these animals, intensified drastically over the days, this being the only food for those who still survived in the stream. 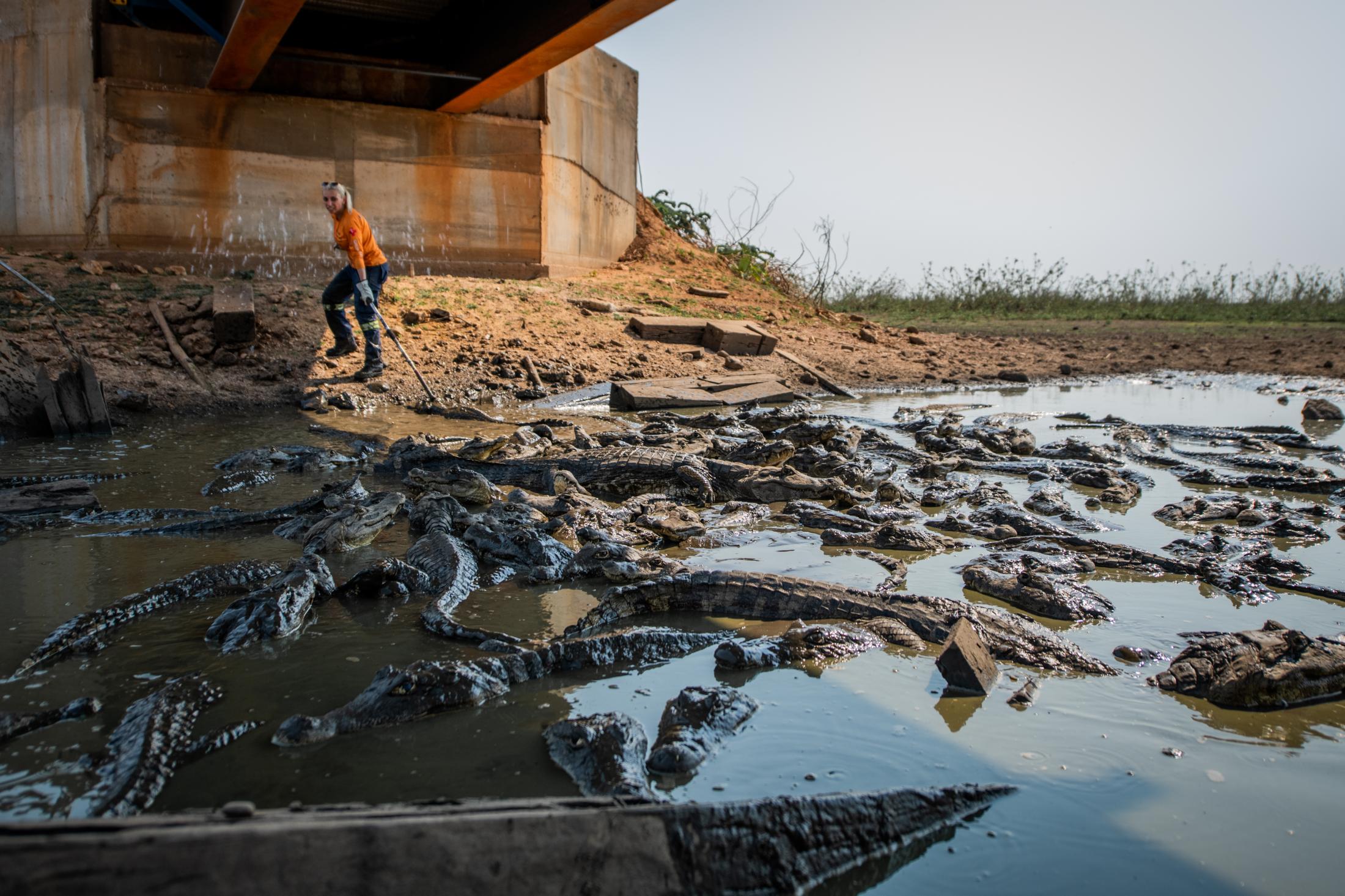 To contain caimans, trained veterinarians and biologists use grips. The operation always takes place with 3 participants. The first is responsible for capturing the animal with the grip, the second for applying the vagus nerve stimulation to make the animal lethargic and the third is responsible for tying its limbs. 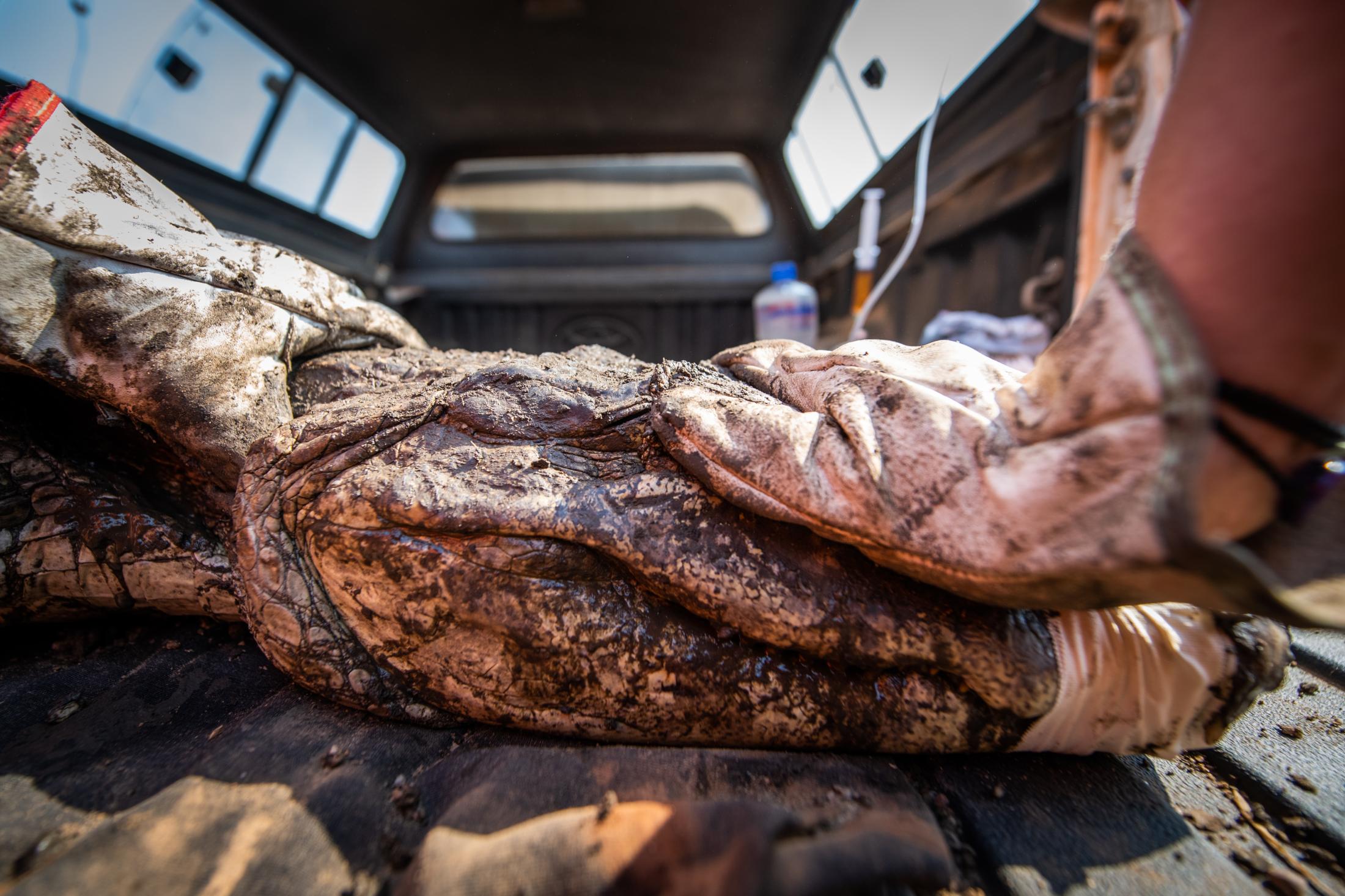 During retention, stimulation of the animals' vagus nerve is used. Veterinarians and biologists apply gentle pressure to the eyeballs of alligators to make them lethargic. This procedure is repeated throughout the animal's handling so the application of sedatives is not necessary. In this way, alligators quickly return to their rhythm after release. 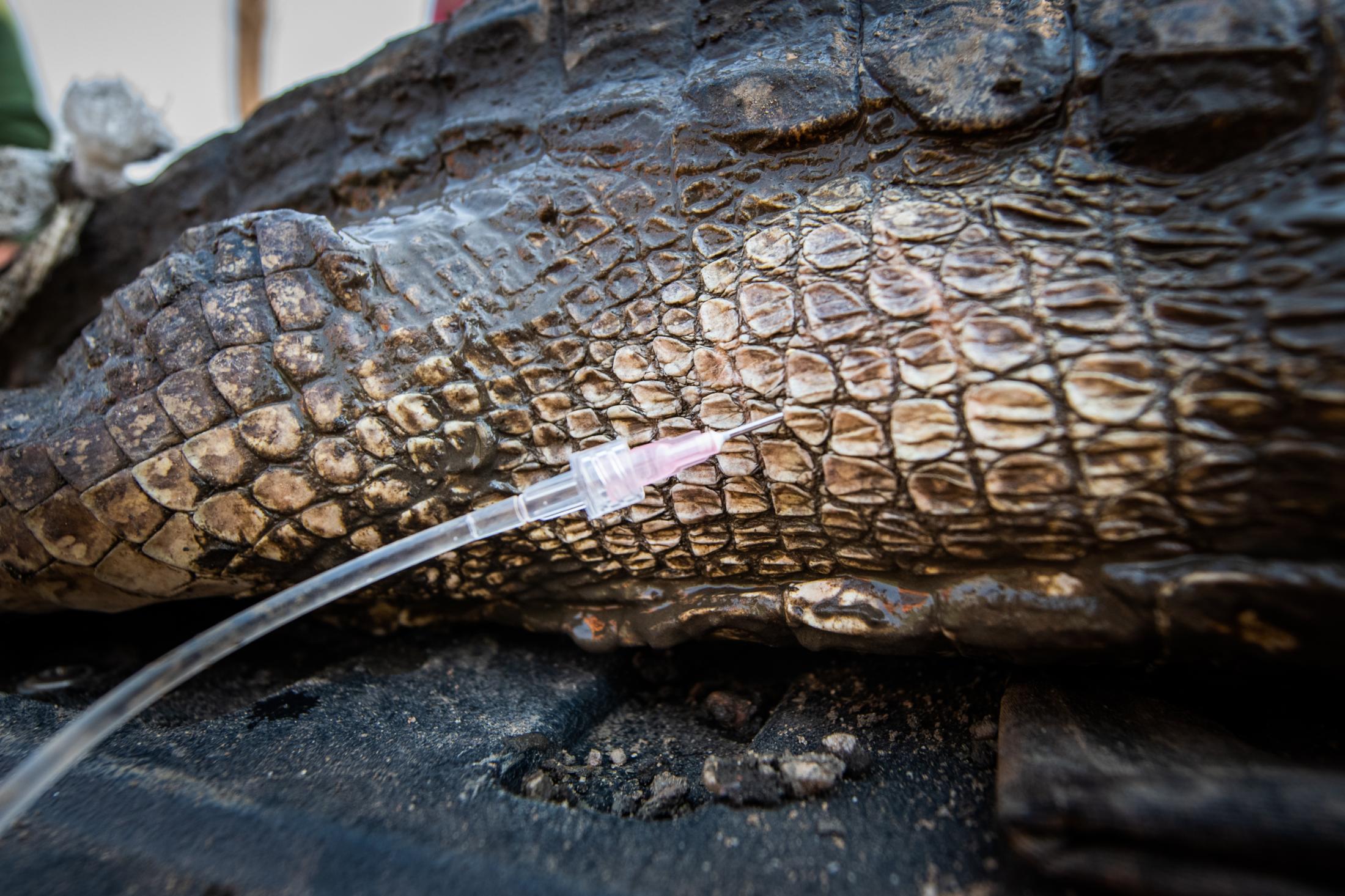 After containment, the animals are taken to the treatment and evaluation in IBAMA vehicles. Initially, a body score, from 1 to 3, is assigned, which defines the animal's health status. Then follows the treatment according to this score. The animals receive vitamin supplementation and also serum for hydration. 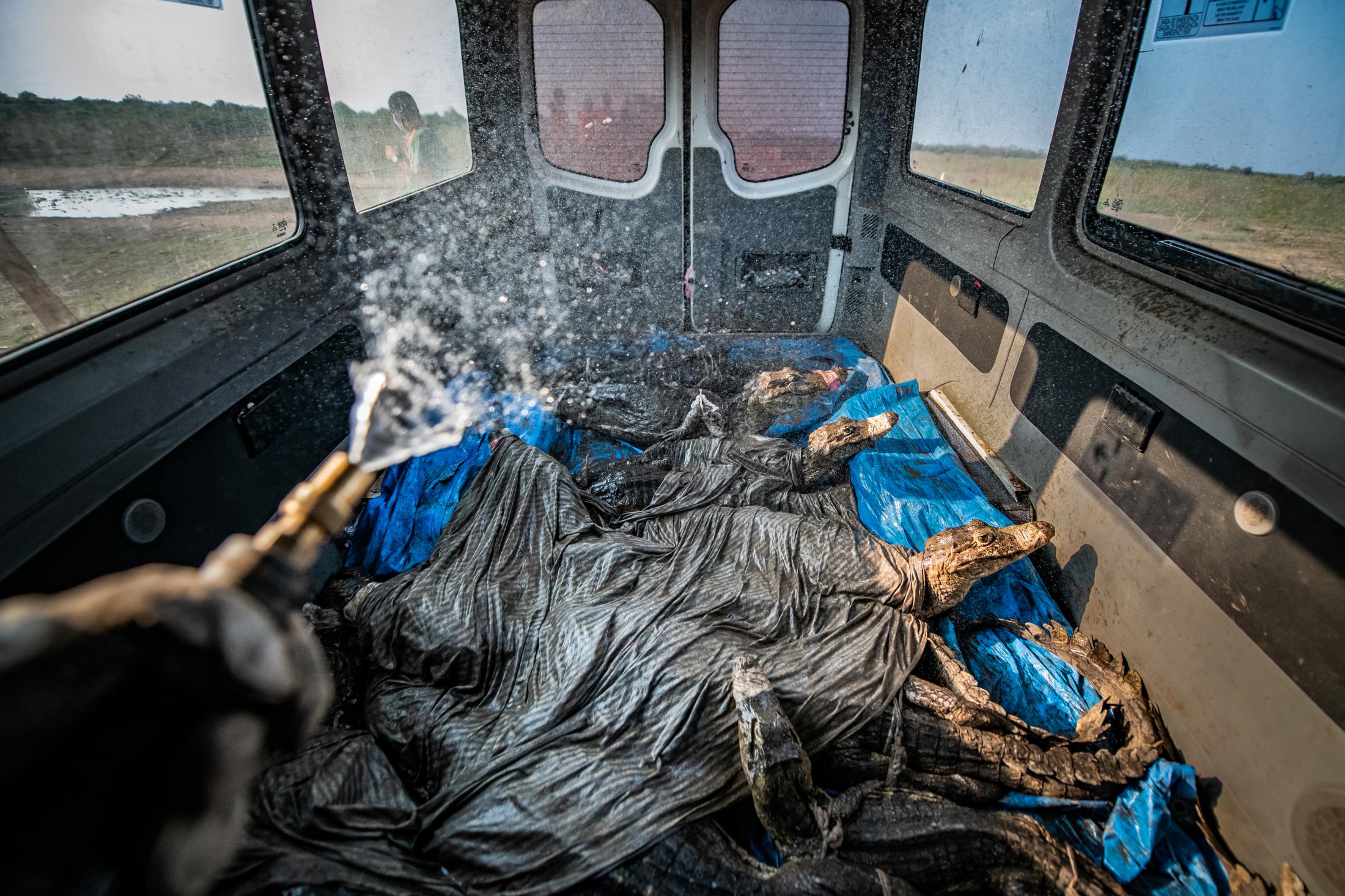 After supplementation and hydration, the caimans are gently placed inside an equipped van to maintain the animals' well-being. Volunteer veterinarians constantly wet animals with back pumps. In the photo, we see the transport of these animals to the Clarinho River, one of the points defined by IBAMA as ideal for release. 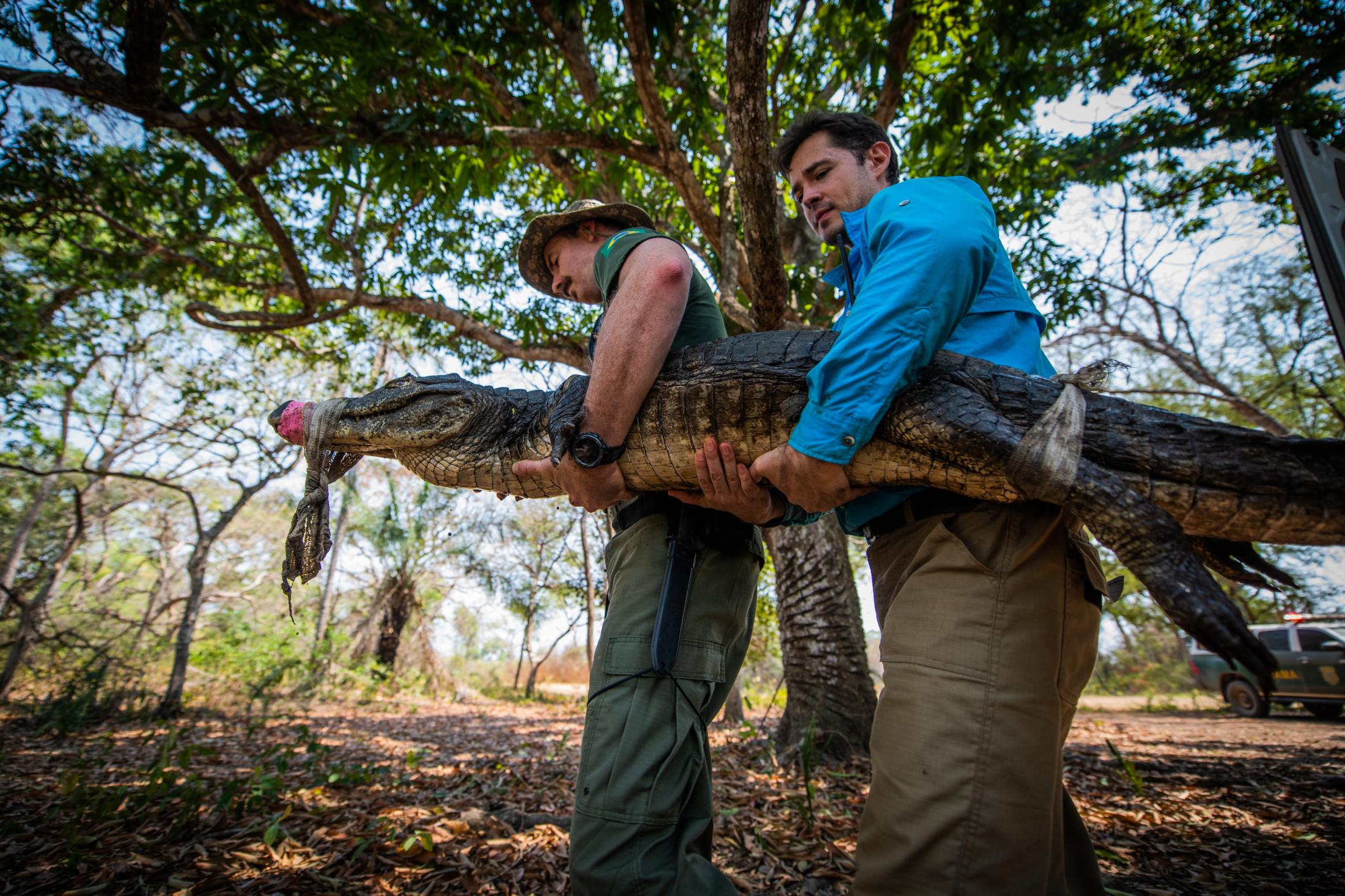 IBAMA agents and GRAD volunteers work together to release relocated animals. The alligators are, one by one, taken to the riverbank where their bandages are cut and the animals released. Moment defined as the most rewarding of the entire operation by the participants. Animals were relocated to regions with large bodies of water and plenty of food.

Knowing the new home. Newly released animal on the banks of the river. 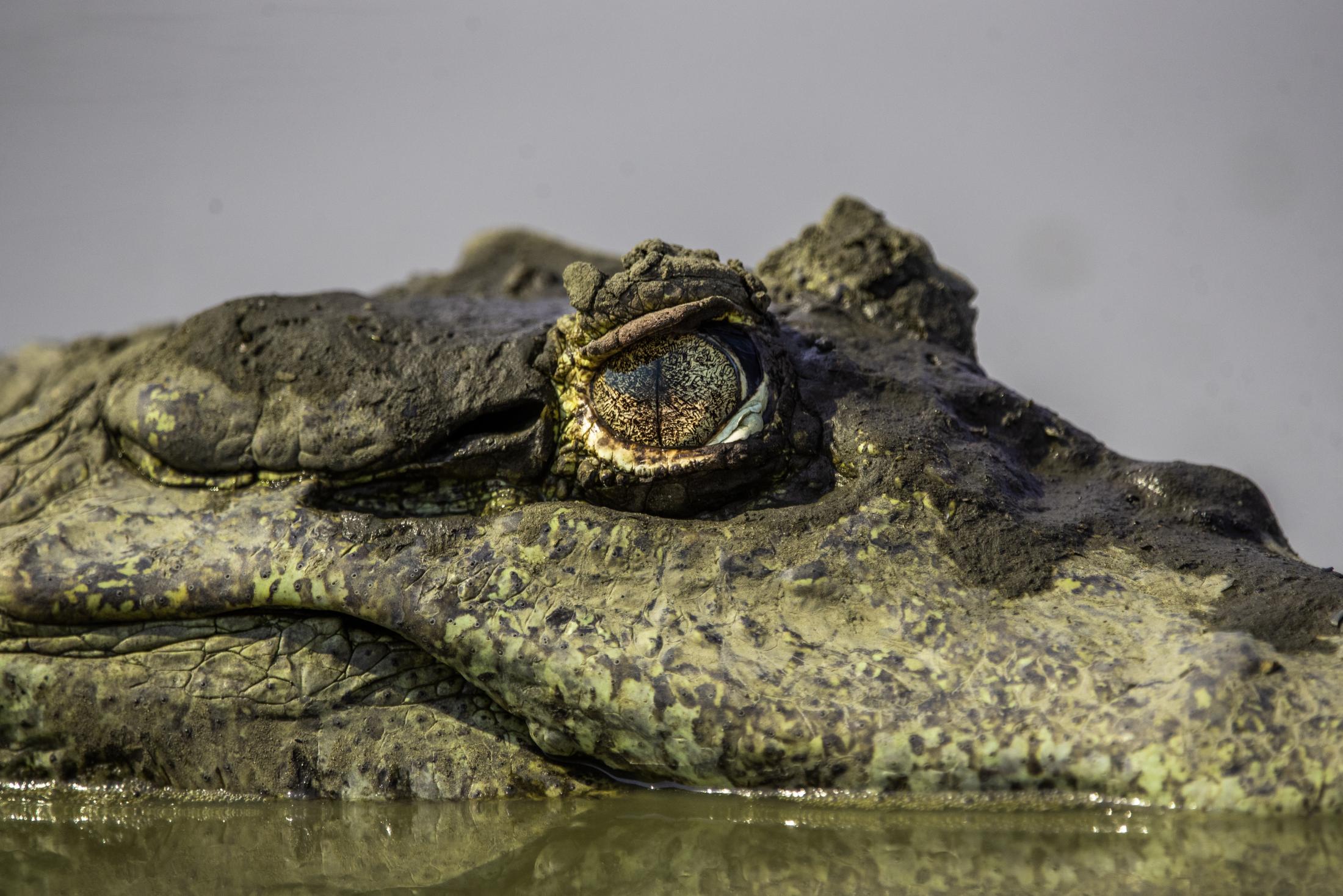 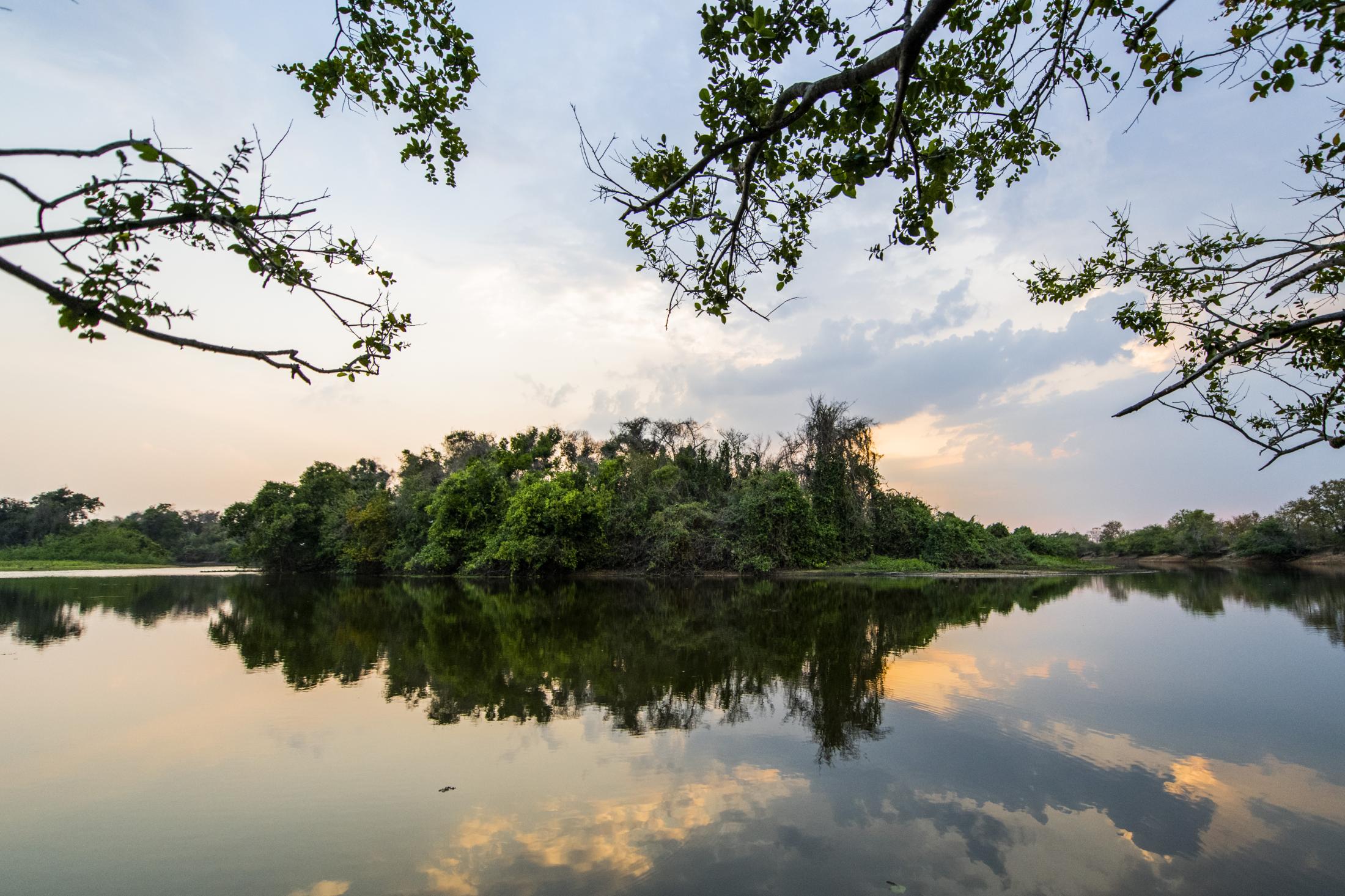 Late afternoon landscape on the banks of the Clarinho River. One of the few remaining paradises along the Transpantaneira highway. More than 65 lives were saved in this operation, which, when compared to the general wetland situation, may seem small, but for each one of these animals it was a new chance to live.

As a result of a drought never seen in the last 50 years, Pantanal, the largest floodplain in the world has turned into a desert in September 2021. Along the MT-060 highway, Transpantaneira, few streams still have a minimum amount of water' survival for the species. During the last drought, one stream caught the eye of experts. Under the third bridge of the highway, there was a body of water that before, even during the drought, housed hundreds of healthy caimans (Caiman yacare). This time, these animals appear huddled together, dehydrated and malnourished.

In scenarios like this, alligators can adopt a brumation strategy, which decreases their metabolism and saves their last energy during the dry season. However, given the analysis of specialist veterinarians and biologists, the situation seen was critical and many animals would die malnourished. Furthermore, the conditions of the water body would not be conducive to this behavior.

Tanker truck operations were carried out at the site to fill the stream, however, under 40 degrees of sunlight, all added water was lost on the same day. As the only remaining alternative, in one of the largest rescue operations ever seen in the Pantanal, the Animal Rescue Group in Disasters (GRAD), in partnership with the Brazilian Institute for the Environment and Renewable Resources (IBAMA), carried out the relocation of more than 65 individuals in critical condition. An operation that took 4 days to be completed.

This photo-story aims to show the abnormal situation in the last droughts in the Pantanal wetlands. Despite the region's annual dry season, these have been drastically intensified, subjecting the world's largest plain to an intense desertification process. This process is largely due to deforestation in the Amazon forest and the reduced flow of flying rivers. Furthermore, I intend with these images to show the efforts of volunteers and federal agents to alleviate the sad situation. I believe that these images are essential for people to have a small idea of ​​what is happening in one of the main biomes in the country and the world.